Much has changed since 12 January 1926, when John Logie Baird demonstrated the first TV system in London. Television has taken the world by storm since, influencing the way we access news, entertainment and sports.

There is much to celebrate, as we look at TV’s achievements in terms of nearly universal reach, the huge diversification in number of organisations and channels, whether general or specialised – encompassing the traditional news, sports, movies – to any subject producers can think of.

We should also celebrate the technical achievements, from an unsteady 30 lines broadcast in black and white back in 1926, to eye popping 4K UHD – with 8K round the corner. From tiny screens a few inches across, to 80 or more inch behemoths, at affordable prices. From transmission from a hill in London to the local area, to distribution via microwave to the furthest reaches of all European countries, to total penetration, with hundreds of channels delivered via satellite to viewers’ homes around the globe.

But, while patting ourselves on the back for all these achievements, we cannot ignore the storm clouds, already engulfing us.

Let’s look at some of the challenges – and whether we can envisage solutions – or should we just surrender?

Identify the challenges ahead

Q: What should the [broadcast] industry be talking about that it isn’t at the moment?
A: The future of national broadcasters. We’re all, rightly, fascinated by what’s happening among the global tech giants and multinational networks. But the typical content provider operates within huge geographical, regulatory and financial constraints. What does the future mean for them?

Broadcasters, public or commercial, terrestrial or satellite, operate under similar constraints: defined national or regional territories, with similar regulatory regimes (government issued licenses, regulations defining their remit and acceptable content) and similar technical requirements. Above all, they pay tax on their earnings.

On the other hand, broadcasters’ main competitors, big tech and social media, don’t have any of the regulatory or technical constraints. All they need are server farms and access to the Internet. They can operate across borders without licensing, they can access unlimited amounts of content from traditional media, earning a large income in the process (without sharing it with the source media) – while managing to pay no tax, or on a fraction of their earnings, in the most accommodating tax shelter available.

“In a … report from the EBU – Democracy and Public Service Media – findings show that democracy has declined in two thirds of EBU Member countries with citizens turning away from politics and public life…The need for strong public service media has never been greater,” says Noel Curran, Director General, EBU. “Anyone can ‘report’ breaking news by uploading footage and gaining a global audience in seconds. This has transformed news consumption but brings with it a prevalence of misinformation and deliberate fake news. The results can have dreadful repercussions for stable, elective democracies.”
(PSM) goes hand-in-hand with a nation’s democratic health.”

…Democracy indices and academic research alike often diagnose a decline of democracy and its core values. As a global trend, new forms of authoritarianism are on the rise, embracing populist worldviews and furthering polarization in society. Even mature democracies do not seem to be immune against these developments which may in the long run hollow out democratic core values such as rule of law, minority rights, social justice or media freedom.

Fight back with European Perspective

Of all challenges faced by broadcasters, social media is the biggest one. It’s eating TV’s lunch by attracting a growing number of viewers of all ages, but mainly young ones. In an attempt to fight back, the EBU and a group of ten members have developed the European Perspective, a collaborative news service that enables audiences to access quality content from other countries, through a feed embedded within their home page.

EBU’s European Perspective wants to make a difference with quality and immediacy.

While users accessing information through social media see a constant flow of posts, selected by algorithms to maximise engagement – and the private owners of social media outfits have come to the conclusion that anger and outrage achieve just that, maximising engagement and income. The result is that users are being fed low quality, manipulated information, provoking a constant feeling of anger and polarisation.

Social media users end up by seeing countless manipulated or wholly invented stories, with no idea about the real source and its intention.

European Perspective has been designed to counter these toxic aspects, to be a trusted source of information from clearly identified, high quality sources whose remit is based on integrity, respect for human dignity, equality, inclusion and the rule of law – all concepts absent from social media.

Beat the social media at their own game

Live news has always been essential for connecting the world. But the transition of consumer news consumption to digital has caused major disruption in the traditional news broadcasting industry. Traditional broadcasters are now competing with digital platforms including Twitter and Facebook in the race for eyeballs, viewer loyalty, and ultimately monetisation.

Long-form news production typically carried out by national broadcasters, such as CNN and the BBC, is becoming less appealing to today’s viewers. News media ratings are dropping as digital sources of information accelerate. Social channels are quickly gaining traction by offering viewers instant access to information in vignette-based formats, such as short, punchy —and typically non-produced — videos.
There’s more remote location-based electronic news-gathering happening today than ever before. Reporters are constantly competing to break a big story first, which includes getting access to first-hand witness statements and user-generated content (UGC) as quickly as possible.

Broadcasters can fight back with technology allowing them to generate video and accompanying text formats suitable for immediate use in social media while, at the same time, producing high quality live broadcasts for on-air use.

Should we give up and let social media sweep broadcasting into a niche, where hardcore aficionados can find what’s left of it, when they feel nostalgic?

After reading this post, you may have come to the conclusion that talented people are working hard and getting together to fight against the avalanche of disinformation and fake news peddled round the clock by social media.

Social media content which is promoting ceaselessly hatred and division, favouring budding authoritarian regimes in the heart of Europe and elsewhere.

Broadcasters are fighting back with high quality, compelling content, reliable news services and the full range of programming broadcasters put at the disposal of their audiences, day after day, since that modest beginning back in 1926.

You may have noticed the absence of the elephant in the room: streaming services like Netflix and their challenge to broadcasters – it’s a subject for another day, or this post would just stretch into infinity.

Sat 10/01/2015
Micheal Weiss in Foreign Policy: Je Suis Charlie (Until Je Get Scared) Michael Weiss gets it about right, except that he should mention that Charlie Hebdo published regularly much fiercer cartoons lampooning Christians or Jews. Not [...] 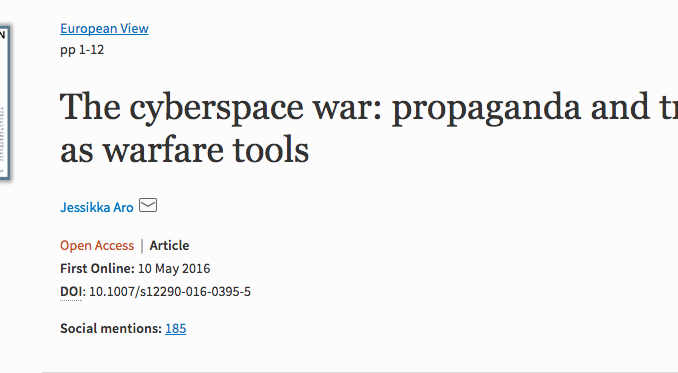 Sat 23/01/2016
When we talk about people with different opinions in democratic societies, we refer to people who can perhaps argue and disagree, but can do it in an acceptable manner and within the limits of laws [...]